my seester tagged me, so here it goes. 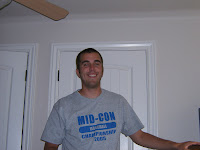 What's his name? Derek Kevin Oliverson
How long have you been together? we've been married 7 1/2 years.
How long did you date? ok, i don't know the exact timing, but it's something like we dated for 6 weeks and then were engaged for 2 months.
How old is he? 28...he'll be 29 on super bowl sunday!!
Who eats more? that's a toss up!
Who said I love you first? derek
Who is taller? derek
Who is smarter? we're both smart in different areas. (he's going to laugh when he reads this!)
Who does laundry? usually me, until i get behind...then he "helps".
Who does the dishes? me, but once in a blue moon he does.
Who sleeps on the right side of the bed? me
Who pays the bills? him, thank goodness. he's very efficient at it.
Who mows the lawn? derek, when we've had one.
Who cooks dinner? me, but he usually helps on sundays or when he wants steak.
Who drives when you are together? derek, and when he insists on me driving he is the worst sideseat driver ever!!!
Who is more stubborn? derek
Who kissed who first? derek kissed me first.
Who asked out who first? derek asked me out, i said yes, and then the day of i tried to cancel...he was having none of that!!
Who proposed? derek, but he claims i did.
Who has more siblings? derek
Who wears the pants in the family? i guess derek does...that's annoying to admit.

i'll tag hhhmmmm...i don't know who has been tagged already, so if you read this and you haven't done it yet then your tagged!!
Posted by angie at 12:59 PM

i think it's more of a tie with the stubborn questions. let's be honest.