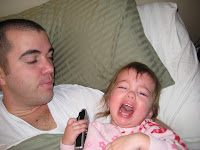 since we had a house full of people, samantha slept in our room in her playpen. for some reason she woke up at 5:30am on christmas morning. we were no where near ready to get up, and the big girls were still sleeping...so derek and i just put samantha in bed with us. we should have just gotten up, because she never went back to sleep. she would cuddle with derek for a few minutes and then come lay by me and then with derek and then with me...you get the drift! FINALLY at 8am the girls woke up, and by then samantha was very tired and ornery. katleyn and annie's room is in the basement (jeff and kristina slept down there with them) so they had to stay down there until all the adults had used the restroom and stuff. also, my dad turned on and cranked up the christmas music. i think waiting in the morning is pure torture for kids!!! they were bouncing off the walls! finally they got to come up. santa left them each a card...in katelyn's he thanked her for the apple pie and milk, and in annie's he thanked her for the reindeers' treats. the girls thought that was SO cool! we had a great time opening gifts. after we had waffles with strawberries and whooped cream. 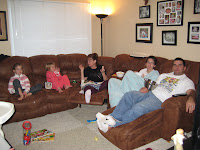 the rest of the day we hung out, relaxed, napped and played. 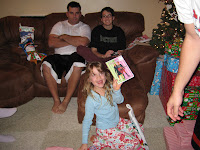 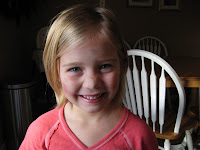 annie asked santa for makeup, and she had to run and put it on the second she opened it!! 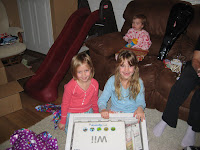 katelyn asked for a Wii for christmas, but santa didn't really think that was neccesary! lucky for her derek's parents gave us one for the whole family. (she was super excited, but to my relief she was actually more excited about her gifts from santa.) 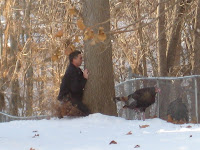 we live right by a wooded area, and christmas morning there were about 6 wild turkeys wondering the neighborhood. my dad thought it would be fun to play national geographic!
Posted by angie at 10:28 AM