that's annie for ya! 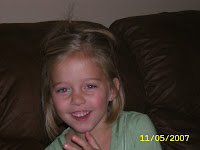 so, i should have made this blog a week ago, because annnie had a pretty funny week. i decided to tell her stories anyway, because they are so darn classic! the girls are in a carpool for school, and the other day it was my friend's turn to take. after she got back from dropping the kids off she came over to my house and just stared at me. finally she asks me if i have an announcement to make. i was totally confused, so she proceeded to tell me that annie told everyone in the car that her mom is having a baby next year. i tried to convince my friend that i wasn't pregnant, but she totally didn't believe me. later that day annie had dance, and when i went to pick her up her dance teacher asked me when i was due! ha ha i asked, "due for what?". she said that annie had told her that her mom is having a baby next year! ha ha ha ha when annie heard us talking she walked up to me and whispered in my ear, "i said MAYBE"!! for the record...i'm not...but apparently annie wishes i was!!
next...kristina came to omaha to visit, and i was really excited, so all my neighbor friends knew she was coming. well, one morning a friend of mine watched annie so kristina and i could go shopping. later my friend called to ask me if kristina's husband came too. i told her no and asked her why...she said she was confused because she thought my sister was visiting, but annie kept saying her UNCLE this and her uncle that...ha ha ha when kristina cut her hair short derek started calling her uncle kristina...i guess that's what annie will call her from now on!!!
Posted by angie at 6:52 PM

Hey Angie,
Its Danielle!! I found your blog through Joanna's and thought I would say hey. Your girls are darling! We have a blog too it's www.lattafamily.blogspot.com

Annie is a crack up! Maybe you are pregnant and you don't even know it. hee hee. Kids are sometimes right when it comes to this kind of stuff.
We missed you at play group today. Abigail thought we were going to Annie's house when I told her where we were going. She was very excited. Can we still come on Fri?

Your little Annie is adorable. She seriously looks just like Derek. And...maybe she can see into the future...you never know...HAHAHA!!! Like I said before, I'm so glad I found your blog. We miss hanging out with you guys and all the "Cedar Boys". At least we have blogs now to keep in touch better...hahaha.
PS...Matt loved looking at your family pictures too!!!