annie and alex became friends when we moved to omaha. (alex's dad and derek are in the same class at school. alex's mom and i have become best of friends.) their friendship has grown into something "more". they are in love and not affraid to show it!! they really are best friends. when annie lost her first tooth she had to run over to alex's house right away and show him. 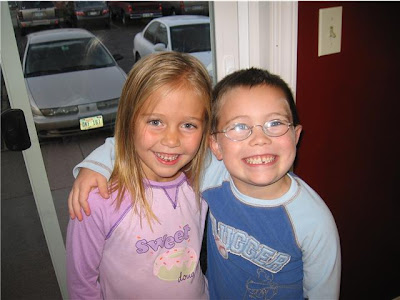 alex always talks about someday he and annie will get married after he gets home from his mission to canada! on saturdays another one of my friends teaches a little cooking class at her house. i'm a retard and have forgotten every time. this past saturday the kids learned how to make spaghetti. when we got home from running errands that afternoon, and the girls had missed the class, alex came running over and told annie she had forgotten the class. derek started joking with alex and said, "way to go alex, you forgot to remind annie about the cooking class...now when you guys are married she won't know how to make spaghetti." without missing a beat alex said, "that's ok...i learned how to make it." AREN'T THEY CUTE?!?! 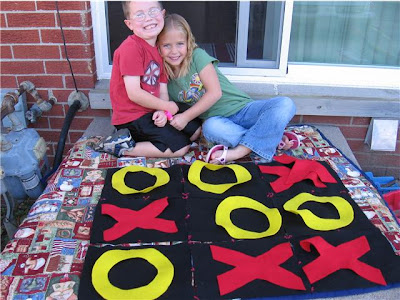 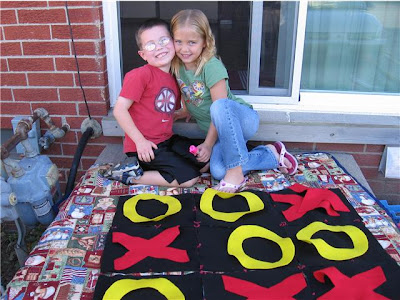 P.S. they were not coached to pose like this...they did it all on their own!!
Posted by angie at 1:45 PM

Oh my goodness... I am laughing out loud! That is so hilarious and so cute. Young love! It really cracked me up. My Dawson has a new kindergarten romance that I have blogged about. It's nice to see someone else's kids have crushes too.

This could be trouble--but, they are so cute! :o)

Angie-
Your kids are so cute.(of course. What could one expect with such a cute mommy). Keep up the good work with then. You're a great mom.

Oh my gosh, that is seriously so funny. I like how they are cuddling with an XOXO blanket! I can't believe Annie is old enough to like boys!

That is so cute! Save those pics for sure...cause you never know!

Oh too funny. They are so cute!!! I love that little Einstein Alex. You couldn't have chosen a nicer young man for Annie. . . . couldn't you have waited for just a couple more years? jk

All I can say is you are going to be so lucky to have such a coolio mother-in-law for your daughter:):)

Oh man that is the cutest thing ever! My favorite part is how he knows he's going to Canada! Ha ha! I love it!!! Kids are the best!

not so fast Annie. Kyle and you are meant for each other; you just don't know it yet.