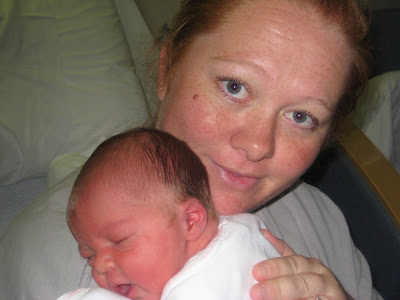 Going Home
this time around i stayed in the hospital for 2 nights. with the other 3 girls i was tapping my toes waiting for the first 24 hours to end to i could get home. this time i needed the full 48 hours, but then i was ready to come home. samantha kind of freaked out when i got home. she wouldn't stop crying and if my mom got anywhere near her she would flip out. it's kind of like that still. if sam and my mom are alone then sami is so good for her, but 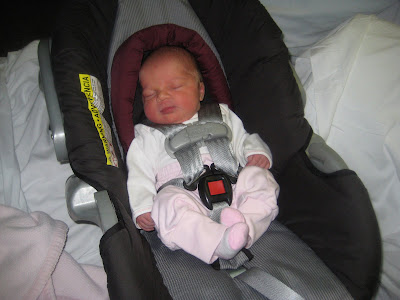 if i'm in the room she is mean to my mom. apparently samantha doesn't realize how lucky we are to have grandma here for as long as we do!!! samantha did one of the funniest things the day we came home from the hospital. i was feeding alexis and sam got her car seat, dragged it up on to the couch next to me and said, "baby in, baby in." ya, she was ready for the baby to leave after being home for about 5 minutes!!! i've been trying really hard to spend time with samantha and let her know she's still loved...i'm pretty sure she still thinks alexis rained on her parade!!! getting into the lotion is the most naught thing she's done while i've been nursing...so i'm thankful for that!! 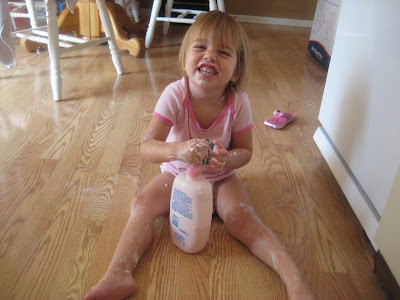 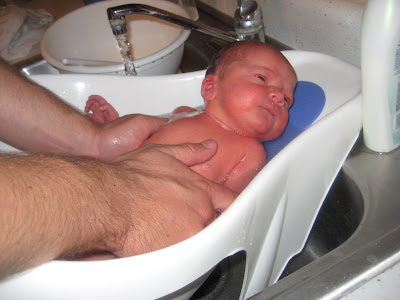 baths are SO relaxing
alexis already likes her baths. out tub is perfect because even with it pretty full the water still doesn't get up to her belly button/cord. so she is still really warm. she looks so tiny wrapped up in derek's hands. i want time to stop for just a little while, so we can really enjoy alexis being so little. 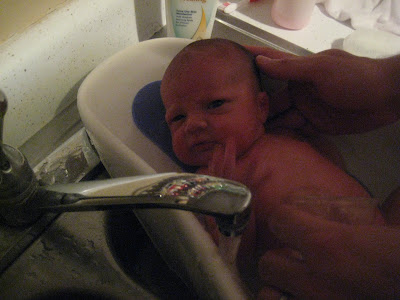 McKenzie is now Alexis
When we found out our baby was a girl Derek loved the name Alexis, with the nickname Lexie. I really liked Alexis too, but Lexie was way to popular for me. So, with a lot of "discussing" Derek agreed to use the name McKenzie. Well, Derek and the girls don't call her McKenzie...they've been calling her Kenzie...which I am not a fan. Then on Monday Derek called her Lexie about 5 times on accident. Later that night he was sitting here looking at her and I asked him what he was thinking about. He told me she's an Alexis, not a McKenzie. I told him too bad!! (My mom was not part of that conversation.) Yesterday I was holding McKenzie and I asked my mom if she could take her. She said, "Come here my little LEXIE."!!!! So, with much hesitation, mostly because it feels weird to call her something different after 5 days, we are officially changing Mckenzie's name to Alexis. Katelyn and Annie haven't had one problem with the change, and actually Samantha can say Lexie much easier than Kenzie. Oh, one more thing...Derek doesn't agree, but I'm totally fine with Alexis being called Alex! I think that would go really cute with Sam.


Weight to be Lost.....
i meant to post this on monday...just because it was september 1st...the start of a new month. but this will be just as good. i am on a quest to finally loose the weight i have been wishing was gone since after katelyn was born. the weight i have been disgusted by for 7 years. now that baby number 4 is here, and i'm almost certain ("almost" because derek's not on board yet!!) i will never be fat and pregnant again i am ready to get back down to my "normal" weight. i'm asking all of you for your support. even if you're somebody who found this blog through a friend of a friend...be nosey and keep checking up on me!! every monday morning i'm going to weigh myself and then post how much i lost or gained that week. (sorry, but i'm not going to tell you my actually weight!!) my goal is to loose 78 pounds from what i was when i weighed myself on monday. so, in about 2 months when i've burned out, or thanksgiving treats are looking very enticing don't let me off the hook. maybe if i'm brave....i'll take before pics and when i reach my goal i'll post them. actually...that might make you hope i never reach my goal!! ha ha ha
Posted by angie at 8:43 AM

I like Alexis and LOVE Lexie.
Good luck on the weight loss. I'm reading about your weight loss while I eat a bowl of ice cream at 11:05 a.m. And that is probably why I'm not posting my weight loss (or lack thereof)

We almost named our daughter Alexis! Cute name....Good for you and the weight loss. I know after having kids it has also been hard for me. At my work we are doing an office biggest loser. My Family is also trying to do one. We will see how that goes as we close to the holidays! I am here for you if you need any support....I may come to you in return :)(This is Mekelle)

First of all CONGRATULATIONS!!!!! She is absolutely adorable! and I love the name Alexis. I can never name my babies before I see them. But when I see them their name just sort of comes to us.

as fara s the weight loss. I've got weight since i had Mikayla 5 years ago that I havent' ever lost. I always thought that it would just fall off like everyone else does but after the 3rd baby I'm determined. I joined weight watchers online and I LOVE IT!!!! In 3 weeks I've lost 10 lbs. It's easy to track stuff and because I'm nursing I get an extra 10 points. I'm never hungry! and I never use all my points. It's so worth it! I'm doing it with a friend who had a baby the same time as me and it's working out so well for both of us! I never ever thought it really worked but it so does! I love getting on the scale every week and seeing more and more weight come off!

Those pics are adorable! Sam's legs look about a mile long in that picture.

Maybe we will have to skip the cinnamon rolls this thanksgiving. . . or figure out a "weight watchers" way to make them somehow.

Last night we went to dinner with kev & marj for our birthday and all of us kept calling Alexis McKenzie! I'm pretty sure I'll be strugglin' with the name change until I actually see her.

You guys are so funny !!!! Changing names like that !!! I guess if it feels like another name it's meant to be. Alexis is a very cute name. And she is a a very cute little girl. Now on the weight loss thing, I can't say much since I'm pregnant and im gaining weight. Its hard to loose weight. I know !!! It feels like every time I would get down to a "Normal" size I would always feel the urge to get Pregnant. So my Quest to loose weight will be there in Five more months. So for now keep me posted on what works and I will take your ideas and put them to work when I'm done. GOOD LUCK !!!! Don't get Frustrated.

Hey, I'm just finally getting around to leaving you a post, but I wanted to say CONGRATS! What a QT! I love Alexis and Alex is way cute! Today I also started back to WW just like we started-what-3years ago? Let's keep in touch and keep each other motivated! Miss ya!

Okay Angie, you know who to call if you want some help! I know that the weight watchers online thing is great for nutrition, but let me know if you need help or motivation with exercising! Just stay motivated and make it a lifestyle change nothing just as a quick fix. Oh and by the way I LOVE the name Alexis and Lexi!! That is one name that I am keeping away from our family so that I can use one day! talk to you soon!

Alexis is very cute, I like it alot! Lexie or Alex too! seeing her in the bath and you holding her gets me so anxious again for mine! The weight will come off keep that determined mind set! nursing so helps! and I too did weight watchers all on my own not on line or at meeting just with their books and tracker and I LOST 40 pounds after having Preston! The weight I will have to loose after this one is scary! but I too want to be a skinny minnie again! GOOD LUCK YOU CAN DO IT!!!!!

Lexi looks so different to me than the other girls. Good luck on the weight loss, I know you can do it because you are a stubborn person!! Ha Ha, Just Kiddin. What I mean is if you set your mind to it you will do it, and it sounds like you are determined to get it done. Just don't do it too fast cause I will be right there with you in a few months.

Such a CUTE baby!!!! I LOVE the name Alexis!! It sounds so cute for a baby and it's a good adult name too. Your family is so cute!! I wish I could see you guys more often! ARe you still in St. George because I am in Cedar.

You crack me up! I have always loved the name Alexis so you have my approval. She is so precious, and good luck with Sam! On to the weight loss....Weight Watchers is the best! I'm sure Derek's mom agrees! Just set a goal for each week it will seem easier than planning for the month! I must say lucky you....I still have one more pregnancy!!! Keep in touch!

Congratulations! She is such a cute little girl.

Hi Angie, I am Gareth Hustead's wife. I link over from time to time off of Jennie's (my sis-in law)blog. I think I only ever met you at your wedding reception in Las Vegas... But had to say congrats on your sweet new addition. She is such a cutie. I LOVE the name Alexis and "Lexie" for short! On the weight thing, I AM RIGHT THERE W/ YA! And I have only had 2 kids! It's tough man, but I wish you all the best. I am now in the Relief Society presidency so I will be teaching in front of all of the sisters from time to time, so if that isn't motivation to loose some weight I dont know what else is! Good Luck and Congrats!

My Sam has really been having some trouble not getting as much attention as 'pre-baby'. Luckily he is only mad at me, not at Izzy(aka Elizabeth)! Josh is so rarely here that I am suprized that I am still sane...oh, well maybe I am crazy and I don't know it yet. Yup, that's it. *sigh* Your kids are ADORABLE!!! Next time you are back home by your family you have to TELL ME!! We are there too!