yesterday at 9:17am Kristina gave birth to Clayne Jeffery!  he is the cutest little thing! 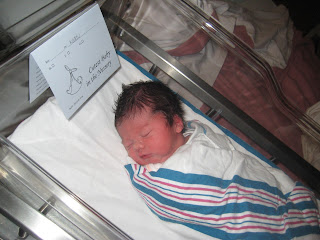 to make a short story even shorter... she got to the hospital at 6:15am, the doc broke her water a few minutes before 8am, at 8:45-ish she was 7.5 cent dialated, 25 minutes later she was at a 8+, literally 3 minutes later i was running down the hall screaming for a nurse to come because she was pushing, 1 minute later a nurse caught clayne with one gloved hand, and the doc completely missed out!!!  it was INSANE!! i've been able to be there for elea and clayne's births.  i love being able to support kristina and jeff and wittness the miracle of a new baby coming into the world.  (plus, clayne might have just plopped onto the bed with jeff watching,  frozen in fear if i hadn't been there!!  hahaha) if i could go back in time i would have definitely gone to nursing school and been a labor and delivery nurse.

Oh, he is beautiful! How fun that you were able to be with Kristina on both of her deliveries. That is so neat. Jenna was with me when I delivered Dawson and Easton and I think it's so great to have a sister. Congratulations on a cute little nephew.

Holy Cow!!! Crazy! He is absolutely gorgeous. I can't wait to see more pictures of him. Love you guys...

He is beautiful!!! Thank heaven for sisters. I can relate with the doctor missing everything part!! Love ya guys

Awesome! When I first got on I was kind of in shock thinking this was a picture of your baby already. Time to count down though right? I am just depressed at how long I still have to go.