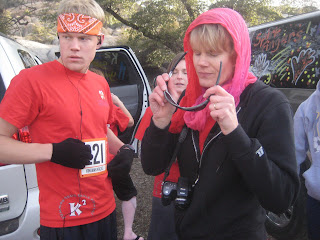 the few friends i've made here in kingman all happen to be runners!  funny how that happens.  they've run a few ragnars together and had a team already made up for the del sol this year.  i told them if they had someone drop out that i would love to do it.  i kinda said that to be cool... not really thinking it would happen!  well, it did!  about 1 month before the race they asked me to be a part of the "kingman krazies"!  i actually did pretty well with my training, and with a lot of tips from my friends, i feel like i raced well.  i had to get up at 4:30 am on friday. our start time was at 8:30am and we had about a 2 hour drive to get there.  the 12 of us loaded up in the cars and headed down to the start line.  i was #2... luckily #1 was an 18 year old kid, jesse, who is super fast, like 6 minute miles fast.  he took off from the start line and got us a HUGE lead!  by the time he got to the exchange where i was waiting he was minutes ahead of anyone else.  which was a great thing because i'm pretty slow!  my first leg was 3.6 miles and had 2 pretty good sized hills.  i got passed by 2 people and about 40 ft from the exchange a girl tried to pass me.  i was having none of that so i started sprinting and handed off to our next runner before she could pass me!!!  it was nice going 2nd because then i had a long time to rest before my 2 leg.  my next leg was only 3 miles and it was flat.  so i made the goal to run it at a 9:30 pace.  i usually run about a 10:30 so it was a pretty lofty goal.  when #1 handed off to me the sun had set, but it was still light out.  about a mile into it was dark.  i was keeping my 9:30 pace pretty good, and i had actually passed 2 people (ROADKILL!)  then all of the sudden this chic passed me.  i was SO mad.  at night it's a rule that you have to wear reflective gear.  so all of us runners had headlamps on and some sort of light in the back.  this lady's light on her back was bright blue.  it reminded me of that creepy anglerfish on "finding nemo".  so i totally zoned onto that light and didn't even look at anything else.  i refused to let this chic get 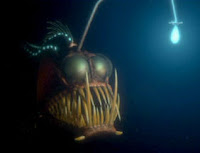 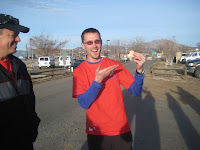 away from me.  when i knew i had about 1/2 a mile left i kicked it into gear.  i totally smoke that lady (kill #3) and made it to the exchange.  my average pace for that leg of the race was 9:24!  i am still totally pumped about that!  then it was my turn to cheer on our team.


#3 (mike) is an amazing runner and after his 2nd leg he was done.  he was slurring his words and really tired.  we decided his champion food - poptarts - just wasn't cuttin' it!!  luckily after eating some real food and getting some rest he was ready for his 3rd leg later the next day. 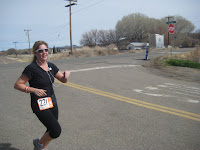 #4 - amy - had the scariest run on friday night.  it was 7 miles, lots of hills, lots of traffic, no lights, and NO WHERE TO RUN.  luckily she made it to the exchange safe and sound.  unfortunately another person was hit by a car at this point and injured very badly.  we were ahead of the accident and finished our legs of the race.  we camped out at a high school parking lot.  we chucked our sleeping bags on ground and tried to keep some sleep.  this was at about 11:30 pm or maybe closer to midnight.  we knew we needed to be up and ready for #1 to start running again around 4:30am.  so we make it to the exchange and the volunteer at the exchange tells us there's been an accident and EVERYONE is coming to exchange 24.... right where we were standing waiting for our running to come in and for #1 to take off.  long story short... we ended up having to wait until 7am to start running again (suck-o-meter through the roof) just to find out that we really could have just kept going.  also, our team was so flippin' awesome we had past everyone who had earlier start times and where the 5th team from the finish line.  after the race got delayed we realized that didn't even matter now because there where teams who didn't even run all the legs.  anywho, we all were ready to go home because we were tired and the whole situation was just lame. 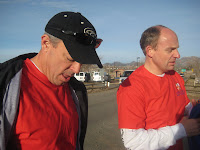 luckily #4 - dion - was not about to have a big old W (withdrawl) by his name and he made us finish!!!  so at 7ish we walked #1 to the exchange and he was mad he had to wear all of his reflective gear and mad we lost our lead and we were all laughing hysterically at him!!!  he took off running his 8 mile leg.  i was dreading my turn.  i had 4.2 miles STRAIGHT UP HILL i swear.  at #1's 6th mile he started limping really bad.  we didn't know what to do, so i jumped out of the van and took his place.  i told everyone i'd just keep running until i was tired and then someone could switch me.  i started thinking that i would like to be able to finish #1's miles and then do my whole leg.  i kinda felt like i owed it to my team since they all had so many more miles than i did.  so another long story short... i ran all 6.3 miles.  that was another thing i was super proud of.  i kind of started thinking "i'm a runner", "i deserve to be here".  i have the tendency to sell myself short, and this race was very good for me.  anyway, 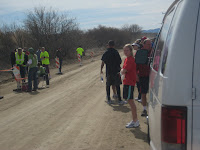 #6 - lauren - was the last runner in our van.  she is so quiet and sweet, but a fierce competitor.  she smoked it on her last leg.  about 100 yards from the end of her last exchange she past 5 people!!  at the finish line we were all waiting for casie to come in.  when she got to us we all ran together to cross the finish line!  it was AWESOME!  oh, and i got a cool shirt, and medal, and a sticker for my car... which i put on my back window the second i got home!! 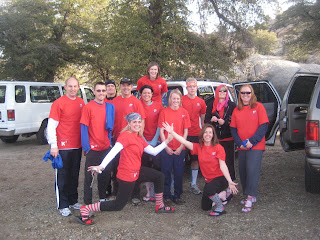 wow- you are awesome. very impressive!!!

You rock!! I want to be a runner when I move to a warmer climate. That is such a crazy story. I'm glad you beat your goal though, that's always a tough thing to do. Nice!!

Wow! I don't know how you do it! Amazing. 6 miles. That makes me want to throw up just thinking about it. Great job!

Wow, Angie, I bet you felt so good about that. You should!!!

love the picture you posted from Finding Nemo. I could picture what it was like just perfectly.

Hi Angie you have no idea who I am but I am Annette's good friend and Mike's (runner #3)wife. Annette gave me your blog to check out because my hubby was on here. So I was wondering if I could use some of your ragnar pictures for my blog? And I would love to meet you sometime. Annette says your just great. Thanks! Ashley Rupp

You're just amazing Angie. Way to be a runner. You're inspiring me to go jog up and down the stairs one time, but I'm sure it will only be once, because my legs will start to shake and I'll be ready for some water:) You all make me smile!!

YAAAAAAAAAY Angie! WOW, I am super impressed! :D I think that I need to take a nap after just READING that! :D You really look amazing girl, you have inspired me to work harder on my own not-as-difficult-workouts...tomorrow. ;) hee hee hee

Ashley you can use whatever pictures you want! i saw you in the parking lot at target when you picked up mike, but i was too tired and nasty to come introduce myself!! thanks for letting us steal mike for the weekend of the race... he is an amazing runner!!