severe weather in the mid-west 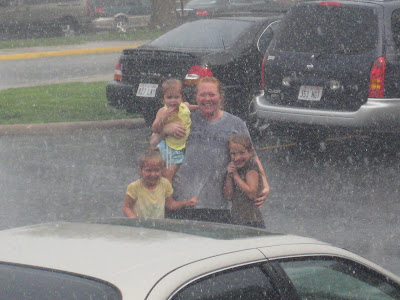 we've had some crazy weather the past few days. luckily no tornadoes...just tornado watches. anyway, last night we had the craziest thunderstorm i've ever witnesses. around 5:30pm i went outside to "collect" my kids and their bikes. it wasn't raining...just really cloudy and muggy. then there was a huge clap of thunder and the rain started pouring down instantly. there was no way to get inside fast enough, so the kids and i stayed outside and played in it for awhile since we were already drenched! it's funny...i had been pretty ornery the whole day, and just feeling "blah", but after playing in the rain i felt better!!! it was alot of fun, and not soon after all the neighborhood kids were out there with us splashing and playing in the mud. the video is one i did last night too, but around 9pm. i've never seen lightning like this before. it was continuous, and there weren't seperate thunders for each lightning...if that makes sense!! the thunder was just continuously rumbling without a break...you can't hear it on the video though.
Posted by angie at 1:33 PM

how do you add video?! I have been trying but they take sooooo long to upload. did you use your video camera or a camera? I have a camera that takes video. I need help.

Oh my gosh, It was crazy weather. It is insane here. This looks like so much fun though. You are such a cute mom.

Yikes! That is beyond weather for us poor desert rats. Glad you're okay. p.s. I still need a Scentsy catalog, please. I have remained loyal to my favorite distributor. :)

Wow. That is bad weather. What a fun mom to go out and play in the rain with your girls. I never do stuff like that. I need to step it up a notch. The video was cool.

I am glad that you videoed it. I thought about it butt it was getting later and target closes at ten ;-p

I love that picture! SO FUN!!!

Dang! Playing in the rain is so fun. Hope you've got your food storage together...