the past few months have been a serious roller coaster ride. back in february derek started feeling like he should apply for a prosecution job. when he decided to quit the police department it was to become a prosecutor. i saw $$ in a private firm, so he gave it a try!!! after almost 2 years of working for a private firm he just knew it wasn't really for him. unfortunately not very many places are hiring, especially not hiring new graduates. but even with a limited job pool he ended up getting interviews with 3 DA offices. he received offers from 2, and we haven't heard back from one yet. ANYWAY, the point of my story is we are moving. i really wanted to stay in omaha, so i haven't been a very good sport about the whole thing. BUT, i have finally seen the signs and i'm getting around to feeling like moving is going to be good for our family. the office where derek will work seems amazing... he's going to love it. so, when are we moving? june 15th... hopefully we'll make it over the rockies with our u-haul towing a car, and get moved into the new place by the 18th. we had originally planned to move the 1st week in august, but we finally realized that's just not realistic. we need to move and get settled so derek has a solid 6 weeks to study for the bar. more importantly... WHERE are we moving? (was the suspense killing you?!) Kingman, AZ. Where in the world is that? it's in between Flagstaff and Lake Havasu. Mapquest it... that's what i had to do!!! a few good facts... it's about 80 minutes from vegas, it's 4-5 hours from san diego, it's 1/2 hour from the grand canyon, it's 15 minutes from havasupai falls, 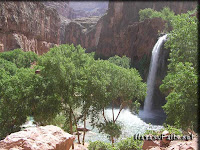 march-november it has fabulous weather, 45 minutes to lake havasu which we've heard the water is warm there almost the whole year, it's 2 hours from lake powell, it's 3 hours from derek's family (including kristina). the big negative... it's farther away from my parents. traveling to KY will be harder because driving there won't be an option, and kingman doesn't have a big airport. campbellsville doesn't have one either... pain! another negative (big to me, but small in the big scheme of things), kingman isn't easy on the eyes... well, my eyes. i really, really, really, really like GREEN. 2 words... grass and trees. and i really, really, really like rain and there's not much of that there either!! it seems like anytime i get comfortable and make a long term plan my world gets flipped upside down. every time it's happened it's ended up being a huge blessing, and i wouldn't change it. so, i may cry, and i'm going to miss my friends here in omaha more than i can express, but i know this will be good. it's going to be a crazy summer!

May 15-16th: derek's graduation
May 22nd: girls' last day of school
May 22-31st: going to utah, then on to kingman to find a place to live.
May 27th: samantha turns 3!
June 1-5: katelyn and annie have a photography class at the omaha zoo from 8:30-11:30am.
June 8th: katelyn turns 8!!!
June 15th: pack up the truck and head to kingman
July 4th: katelyn's baptism
July 6-20th (roughly): katelyn and annie are going to kentucky (hopefully).
July 29-30th: derek will be in phoenix taking The Bar.
August 4-11th: up to preston, ID we go for the oliverson reunion (family farm's 100th birthday).
August 13th: girls' start school
September 7-13th (roughly): head to KY because Thomas will be getting home from his mission!
September 14th: derek's job officially starts.
Posted by angie at 5:54 AM

Yeah!!! We are happy for you guys to be closer too. Sound like you have some busy months coming up.. good luck. If ya need anything let us know. If your ever up this way (only about 1 hr from the cabin) your welcome to stay.

Yay for us...sad for your mom and dad! Craig and I were just there last weekend. It IS beautiful; lots of pine trees. Good luck finding a place to live. If you need anything just give us a jingle.

My niece loves AZ, so I hope you learn to love it, too. Good luck!

So sad to see you leave! I have to admit I'm a bit jealous. It sounds like a great family adventure. And Lake Powell was a favorite vacation spot for us as a kid. You'll have a lot of fun outdoorsy stuff to do, that's what we miss most about living out west. Good Luck!!

Good luck with everything Angie!! I can imagine the conflicting emotions. How far away are you from Sedona? It's very important you find out. I'll tell you why when I see you in a few weeks. (I too like keeping people in suspense.) I'm coming to graduation and staying like a week, so hopefully I'll see you.

You'll be only 4 hours from us! Wow, what a change! I thought you guys we staying put there in Omaha. You will absolutely love it here. I don't know if the weather in Kingman is the same as Mesa, but we get quite a big of rain. Surprisingly there are monsoon seasons. It's nice.
We'll have to come take a trip up there and come see you guys!

Well now that you write down your whole schedule it makes it seem so real. I am still in denial that you are leaving...so I will just keep it that way for awhile. We love you guys!!!

Shoot! You had my hopes up that you were moving to Reno when you mentioned you had visited. Good luck with your crazy-busy summer!!

Congratulations! I totally know how you feel! Jason & I moved around more than I like to remember with 3 tiny little kids! I hated leaving each place! But, I learned that if I went to a new place KNOWING I would be okay and like it I did - on the other hand if I went in KNOWING I would hate it that too is what I got!! Good Luck!

Congrats !!!!
Kingman is Nice !!!!
Heck, I drive thru Kingman everytime I go see my Family in Vegas. We always stop there to get Gas. We will have to go over there and say HI !!!! Hey on your way to Kingman, if you need a place to stay for the night we would love to see you guys. We live in North Tucson. right off Interstate 10 you guys will probably drive right pass us. Let us know !!!!
here is my e-mail
Jenks_Crew@yahoo.com
Melissa Jenkins

Here are some good things about Kingman Arizona !!!!
NO Daylight savings time. We stay on the same time all year long
TV shows come on an Hour earlier
Schools have Rodeo Days Off in Feb.
Interstate 40 speed limit is 75 !!
IN and Out is right off the Freeway !!!!

Arizona will grow on you, It grew on me. It's been 3 years this June. Actually we moved in on June 18th just like you guys are.

Lake Havasu is fun, but really really hot in the summer ( I went in Aug, 127 outside, not so much fun ) just dont go during spring break either, unless you guys want to PARTY !!!!!

Wow, I don't envy your schedule for the next couple of months. Moving is brutal. But I am sure it will all turn out fine. Good luck on the bar, Derek!

Wait....you are from Preston, ID? My relatives are from there too. I wonder if we are related. I bet we are :)

CRAZY! It sounds like you're really good at making life difficult:) I'm sorry that you have to leave your new place so soon, but I'm sure you'll bring some extra sunshine to AZ! Best of Luck with the fun times ahead!

we are so excited for your family!!! sad to leave the green, wonderful friends and memories... but great to be starting a new chapter!!! we will miss you and have to catch up in utah, vegas, or wherever!!!

Wow that does sound like a crazy summer. My grandparents lived in Kingman AZ for years and I grew up visiting there about once a month. I thought it was a great place back then. I'm sure you will enjoy exploring a new area. But I know what you mean about the GREEN. I never new it existed in Vegas. Sometimes I think we can find a way to love anyplace we live. Best of luck.

We will miss you guys! You'll make friends easy where ever because you both are so friendly! Let us know if you need help with anything!

I have hike the havasupai falls and am dying to take tim there.... since you are so close to st.george, I would love to figure out a way to come hike them again with some professionals! I think moving is really hard and I miss all the omaha friends as well....does this mean you could still try for the half marathon??? we love the olversons and wish you the best....the good thing is that you will always have your old friends....that's what I love about new places...it helps until the new ones turn into more old ones! Good luck! lots of love, cindy

Good luck with the move and with the bar. You definitely need the study time for that. Enjoy AZ!