Sami and her blankies

samantha is very attached to her blanket. i don't even remember where it came from. i think i may have bought it for annie, but annie chose a different one. anyway...sami got a big piece of gum smashed into it. i'm sure there is a trick to getting it out...but honestly i'm glad for a reason to get rid of it and start fresh!! it used to be soft and fluffy. now even after i wash it it's dingy and crunchy!! ha ha (not a pretty picture...i know!) so today we went to walmart and samantha picked out a new blankie. she's into Dora right now, so she was super happy with what she found. 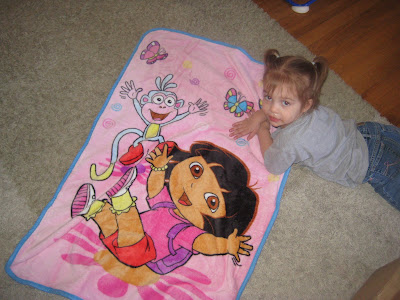 the old one is the pink/flower one on the left. 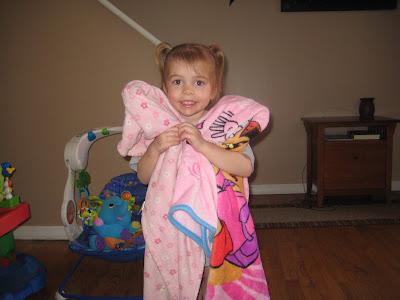 she wasn't even sad to throw it away! 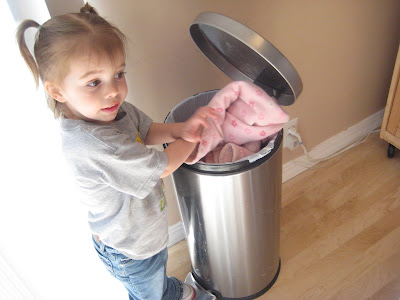 this is for my own personal journaling...
katelyn had a little brown dog (thank you mom) and she sucked her thumb. we would lose that stupid little dog ALL THE TIME and katelyn would cry until it was found. i started to cut chunks of it off when she was about 18 months old. by the time she was 2 there was only a little square piece of material left, and then i took it away and told her her puppy went bye-bye. she cried and had a hard time sleeping 1 ngiht. after that she got over it and never sucked her thumb again!
annie started out with a cream blanket with teddy bears on it, and she LOVED her bink. after about a year the blanket was disgusting (she chewed on it) so i chuck it and bought her a new one, but it was the same exact blanket. when she was about 4 we chucked that one and she picked out a princess blanket. she has to sleep with it and it has to be laid on top if her a certain way. princess side up and the tag has to be down by her feet. (when she turned 2 i took the bink away. she had a few rough nights and nap times. we had bought and lost tons of them, and she would be in her room playing and come out with a bink...causing the drama all over because i would make her throw them away!
you know sam's blanket situation. she also used a bink. at 18 months old i took it away and she didn't even care. i'm pretty sure she sucked on the stupid thing because she thought i wanted her too!!!
alexis...loves her bink. not sure what other thing she'll be attached to. she has a blanket, a little tiny blanket with tags sewn on the edges, a little baby doll, and a sock monkey. any of those things i would be fine with her getting attached too!!!
Posted by angie at 2:31 PM

This is really sad...I still have my baby blanket and sleep with it every night. I'll be 27 in 3 weeks. Travis hates it!!!